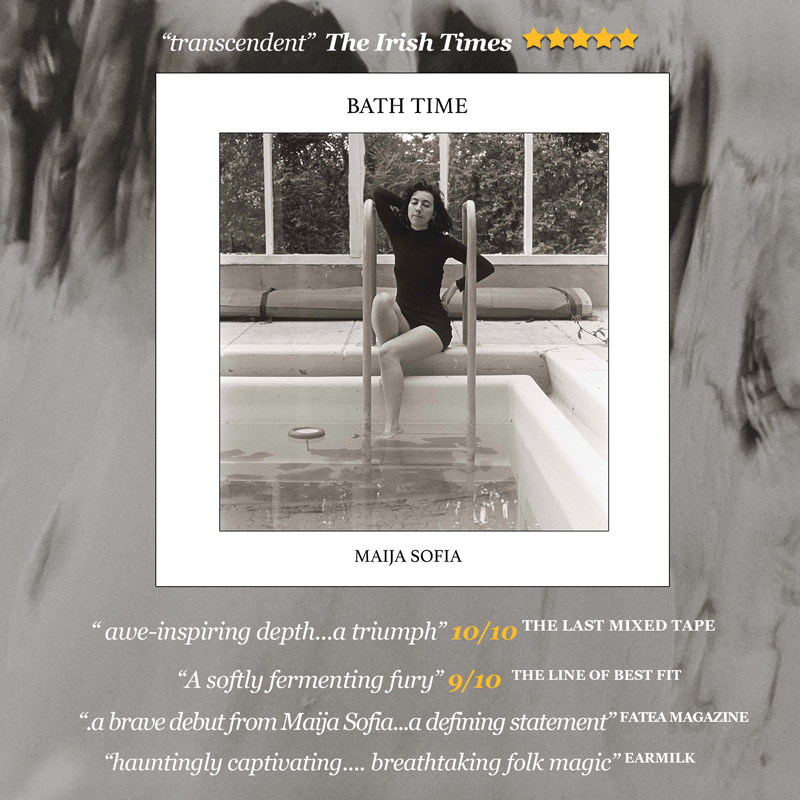 Following the success of lo-fi dream-pop single ‘Flowers’, Maija Sofia releases her debut album ‘Bath Time’ out on Trapped Animal Records. Sofia took inspiration from story-driven traditional folk ballads and shone them through the lens of a punk DIY ethos. The album name comes from the ritual of daily bathing, a whimsical place where most of the lyrics were written. The album deals with the ways in which women's voices, stories and desires have been sidelined and misrepresented throughout history. From Edie Sedgwick to Bridget Cleary, Sofia's songs imagine a world in which silenced women speak back.

"something uniquely compelling" The Line Of Best Fit

"Maija Sofia’s debut is a triumph and this is an album that needs to be heard." 10/10 The Last Mixed Tape

"This is a brave debut from Maija Sofia. It would have been very easy to exploit her ethereal vocals and songwriting stengths to romanticise her native Ireland. Instead she uses this debut album to make a defining statement about the role of women, and seeks reparation for their misrepresentation over the centuries in both culture and legend." Fatea Magazine

"A real timeless quality is rare in so much of modern music, but the delicate timbre of Maija Sofia's music is impossible to ascribe to a particular moment. She doesn't occupy an easily identifiable space - there are few genres which could accurately pinpoint her sound - and the ease with which she weaves grand tales of mythos into short and delicate folk tunes suggests a true finesse. Her subject matter is seldom trivial - abuse, mythological stories, feminism and loss are considered with a confident serenity [...] Fans of Sofia wait with bated breath for the release of her first full-length LP in 2019."

Looking for something that's out of stock? Click here to get notified if it becomes available again.
Twitter

More in Vinyl View All